Designed for pleasure, to inform and delight; Studio Books are artistically crafted in prose and in verse, classic in style, traditional in theme.  Each Studio Book participates in the Great Conversation of Western Civilization, that family gathering of Homer, King David, Hesiod and others whose words are put to letter, read through the centuries from writer to reader: sincerely from me to you. 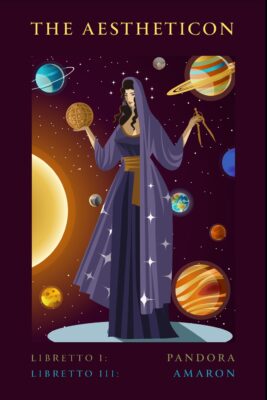 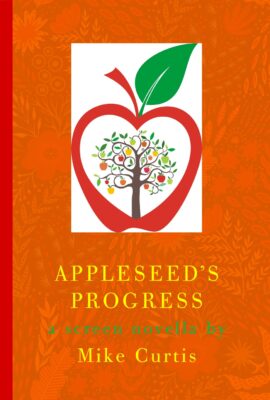 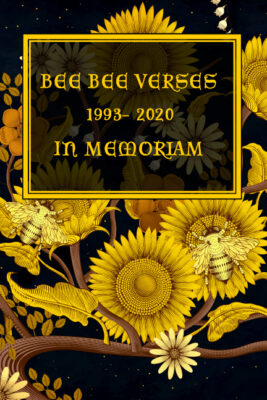 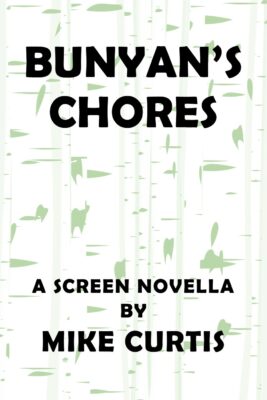 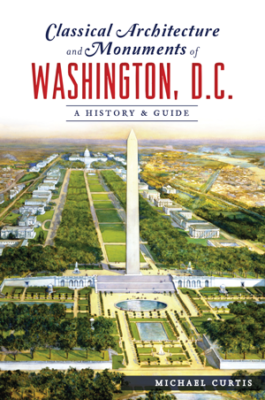 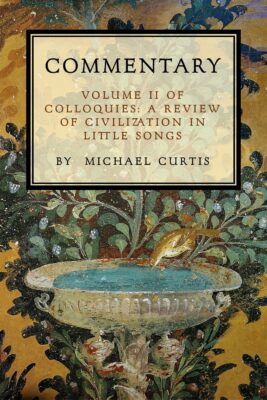 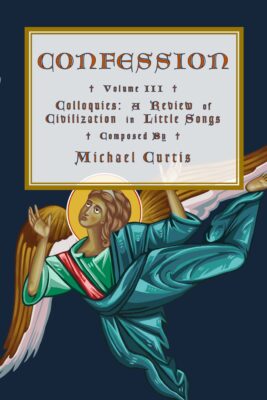 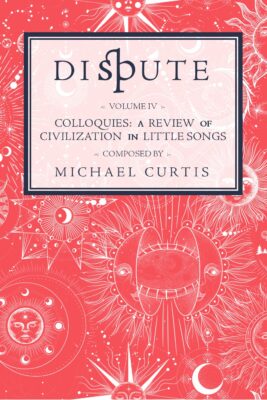 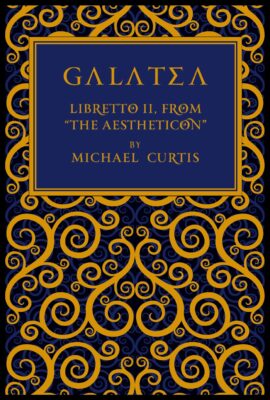 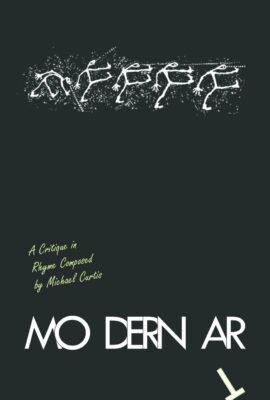 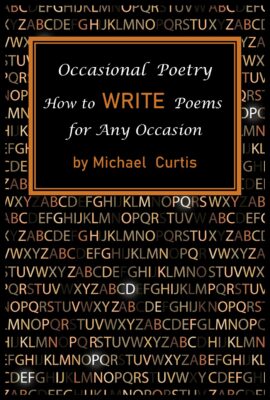 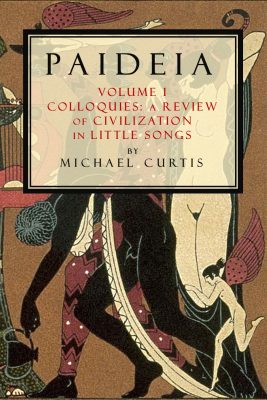 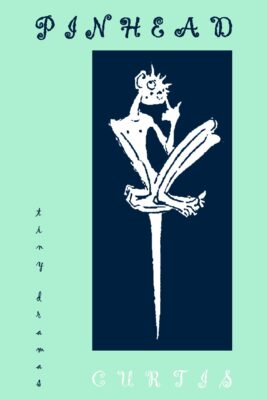 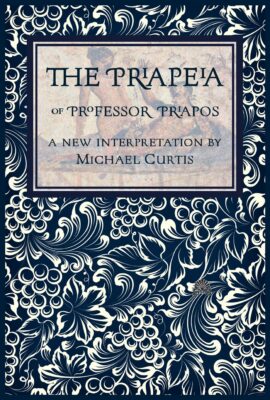 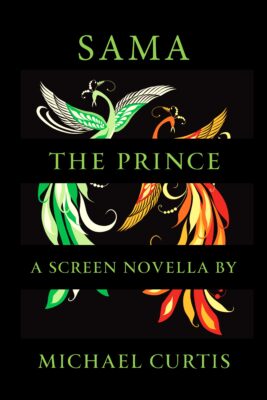 You will recall Pandora, elder sister to Eve, child of Zeus rather than of Yahweh; the first of our type, sinless: she closed the jar on Hope (that most deadly of spirits), skipped along and married Epimetheus (hindsight).  Our story concerns the calculated creation of Pandora (meaning, “all gifts”), her romance and her marriage to Epimetheus, that hopeful titan who looked forward, blindly.

Our second story, the third in the tetralogy of libretti, “The Aestheticon”, coins a new, Classive goddess, “Amaron”.  Amaron, in the first instance, is named for an extinct Greek flower; for a picture, “Amron”, painted by the most remarkable, least know artist of the XXth Century, William Girard.  To improve the name so that it might better scan, to be more lovely and poetic, an “a” was added (Amaron).  This new goddess … hum, what might be her realm, her power.  Here, the irrepressible, silly (in the archaic, angelic sense), personal aesthetic, a force of innocence that might stand against all the world.

Small, lean-muscled, quick and restless; long of beard and hair; the eye, black sparkling; barefoot, cloaked in a burlap sack; tin pot and animal skin hatted; in doctrine, a Swedenborgian; in practice, a primitive Christian, moral and blameless; a settler of open spaces; neighbor to streams and loamy places; planter of trees, trader of seeds; missionary: Johnny Appleseed prepared the spirited wilds for civilization; a wilderness voice proclaiming, “prepare ye the way”.

A tribute, a bouquet, a poesy beautifully petal’d, sweet, alike honey, a golden home for Bee-Bee in poetry.

Here, a book for she of the silvery wings, of rose-thorns, of weeds and flowers wild from which she has flown away to who-knows-where without-a-care in the world, leaving behind lusty, loving verses, prayers and delicious remembrance.

Listen … read … hear the honey-sweet words of joy, the poetry of love.

This timber-tale is composed alike movie-writer would so that you might make the picture move in your mind, at wherever place you might be or might like to be, doing whatever you do or might like to do; myself, I like my movie with popcorn, stale popcorn, you know, when the butter soaks-in and it gets to be soft and scrumptious; then, in the slow, boring parts, when my brain goes to sleep, me and my mouth can have a good time until the action starts-up again; yet, you might like your popcorn hot and fresh and greasy, if so, enjoy it as you like it.

Classive design formed our nation’s capital. The soaring Washington Monument, the columns of the Lincoln Memorial and the spectacular dome of the Capitol Building speak to the founders’ comprehensive vision of our federal city. Learn about the L’Enfant and McMillan plans for Washington, D.C., and how those designs are reflected in two hundred years of monuments, museums and representative government. View the statues of our Founding Fathers with the eye of a sculptor and gain insight into the criticism and controversies of Progressive additions to Washington’s monumental structure. Author Michael Curtis guides this tour of the heart of the District of Columbia.

Book II of “Colloquies: A Review of Civilization in Little Songs”

Stroll the streets of Rome, see the colorful, magnificent sights; hear the sounds and songs of Romans; meet the characters, the cad, the prig, the beauty, the noble lad, the patrician and the pleb as we enjoy the holidays, the calendar of ancient, Latin festival.  Listen-in to the chatter, the talk, the secrets, the opinions, the chit-chat of Romans in war, in orgy, in the Senate House, and at home in prayer, in familial affection.  Become again Roman, rediscover your civil and cultural heritage so long hidden in shadow: see Rome in reading a Rome garrulous in grandeur, friendly to a visitor alike you, alike me.

Book III of “Colloquies: A Review of Civilization in Little Songs”

Lives of the Saints, the Sacraments, the Way of Christ; God the Father, His Creation, the Universe, Man, that Creature part Beast, part Angel, in Soul, Divine, in Action, a Sinner, Redeemed by Love.  Here, for your Consideration, Our Confession: 73 sonnets, hagiography, biography, commentary, lovely illustrations, 106 pages.

Book IV of “Colloquies: A Review of Civilization in Little Songs”

The events and persons of Europe from the Renaissance through the Enlightenment; kings and commons, sinners and saints, sacred and secular, the Arts, the Sciences; the events of plan, the events of accident are spoken of and spoken by notables, and by persons of no account in virtue or in vice.

In Galatea, be sensually warmed by the Aegean sun, with ease recline into the arms of foam-borne Aphrodite, breathe easy, free of Progressively censored opinion, move openly, loosed of the Modernist corset, be Classive, be good, be beautiful, be true, and you will be at home in the body of your imagination, some three-thousand years ago.

Come!  Enjoy this romp in rhyme, this tour of artsy Modern Art, that century-old old-fashioned “new”; the anti-establishment, Establishment.  Come!  Laugh at those who look down their over-long noses at you, my good friends.

How to Write Poems for Any Occasion.  A Guide to Versification, with Helpful Tips, Advice, Examples.

Poetry lives in humankind, in we who inherit the gift of language, of knowledge, of understanding in words. This course of twenty-two neat lectures will introduce you to the poet in yourself; this course will introduce you to other poets who can lend examples, precedent of verse for occasion, the occasions of birth, of romance, of wedding, of achievement; anniversary, founding, dedication; of memorial and of eulogy, each and all of the events, the occasions which create in life meaning worthy of remembrance.

Book I of “Colloquies: A Review of Civilization in Little Songs”

The ancient Axis, Sages, Prophets, Seers, Poets; the Gods and Heroes; the Festivals of Athens; Famous Greeks; life in the cloud-touched temples, the Aegean, and the Hellenes; Paideia and other considerations in Socratic dialogue, monologue, and observation.

Volume I of Broken Rhyme

A book of fable, myth and history lyrically spoken by 1, a pinhead spirit; 2. a she; 3. a sister sphinx and a miscellany of Hellenes.

While sitting on a pinhead / Stuck in an angel’s wing / Pulling through a silver thread / I tapped my head to think,

I tapped again, to no avail / It seems I have forgot / The answer to the riddle / If not, then what?

Argument of the Book:

Some have guessed that I was gathered from around Priapos’ feet, of verses scrawled, of lines graffitied, and from inscriptions neat;

others suppose I was composed by Maeceans’ clever fellows when toasting P. in meter’d verse for bookish wit to show;

many perceive the evidence of a fancy pedigree from Martial, Ovid, Juv, Catullus, and Virgil in composing me.

Most recently my pages swell, tailing on Sir Richard Burton, as here by Curtis I’m augmented, and shortened, I’m certain.

Yet, to the point, it matters not what ere the learned source is, so long as you do practice well the lesson of my courses.

Sama, “Samalon”, son of Apollon, son of Atalon for whom Atlantis is named.  Seven hundred years after the volcano that destroyed the kingdom of Atalon (Atlantis) the island was refounded by Theras, son of Austesion, descendant of the hero Cadmus; it is from Theras that the island receives its name, “Thera”.  Our story occurs before the age of heroes during the age of demigods, Apollon being the human manifestation of the divine Apollo.  Archeological evidence suggests trade between the Aegean Sea’s Doric-Ionian cultures and the North Americas; D.N.A. gives evidence that several American Indian societies have a Mediterranean ancestry.  It is likely that the towns of Akrotiri and Knossos share a common culture.  The jealous eruption of Kaptara scatters the Atlanteans and civilizes the Western world.   Our story tells the history of Prince Samalon and the remarkable Aiyana, daughter of Kubaba.

To Learn and to Know

In Pleasure and Delight
View the Book

Book of the Season

No one familiar with Michael Curtis would call him unexacting. His work displays a keen, critical mind, bringing beauty to the senses and banishing ugliness where he finds it. Modern Art is a playful exercise in the latter. It is a no-holds-barred declaration of war on the makers of Modern Art, using the sharpest weapon for the job: satire.

In this grim reality, Curtis also offers a way forward in the sheer pluckiness of this book and his complete comfort in defaulting to traditional forms in his writing. There is something great worth living and creating for, and while he never comes out and says it, we get the sense that Curtis knows it well. 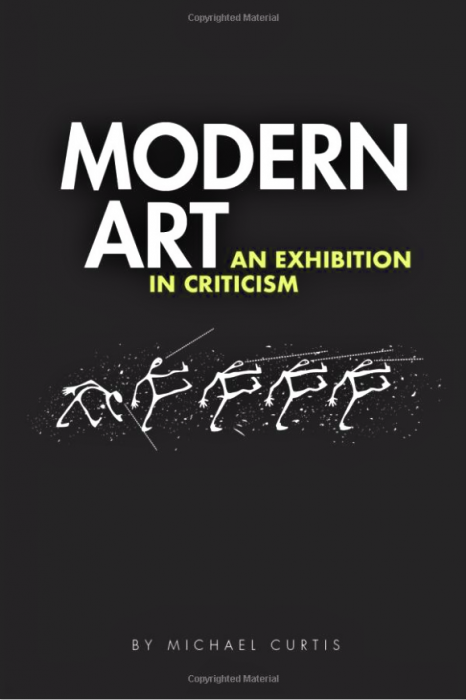 Few things are more snoozy than birds by Brancusi except for his other whatsies and whosies, the mish-mash of this and that stone and bright bronze and other rough stuff that he would pile upon the plates of the critics and the connoisseurs who ate with delight this stuff from the sewers and fed us the masses his smelly caprices then bid we enjoy the great …

The verses of Modern Art: An Exhibition in Criticism are intended to be employed like a rusty-nailed-fencepost by which you may beat pretentious Modernists about the head, repeatedly. The author leaves out no cheap trick of meter or of rhyme to achieve his ends. He employs adolescent singsong, doggerel, slanting rhyme—in short, every—mischiefmaking device he can borrow or invent is used in a manner that would shame lesser poets. Yes, he stoops to conquer. Indeed, conquest is his aim; his tactic, wit; his weapons, mudslinging, ridicule, name-calling, and other dirty tricks of antique pedigree

Michael Curtis has taught and lectured at universities, colleges, and museums including The Institute of Classical Architecture, The Center for Creative Studies, and The National Gallery of Art;

his pictures and statues are housed in over 300 private and public collections including The Library of Congress, The National Portrait Gallery, and The Supreme Court;

he has made statues of presidents, generals, Supreme Court Justices, captains of industry and national heroes, including General Eisenhower and Justice Thurgood Marshall;

his relief and medals are especially fine, they include, among others, presidents Truman and Reagan, Justice John Marshall, George Washington, and, his History of Texas, containing over one-hundred figures, is the largest, American relief sculpture of the Twentieth Century;

his buildings, houses, monuments and memorials are found coast-to-coast;

and then, his plays, essays, verse and translations have been published in over 30 journals (Trinacria, Society of Classical Poets, Expansive Poetry, et cetera), and his most recent book, Occasional Poetry: How to Write Poems for Any Occasion is  available through The Studio Books. 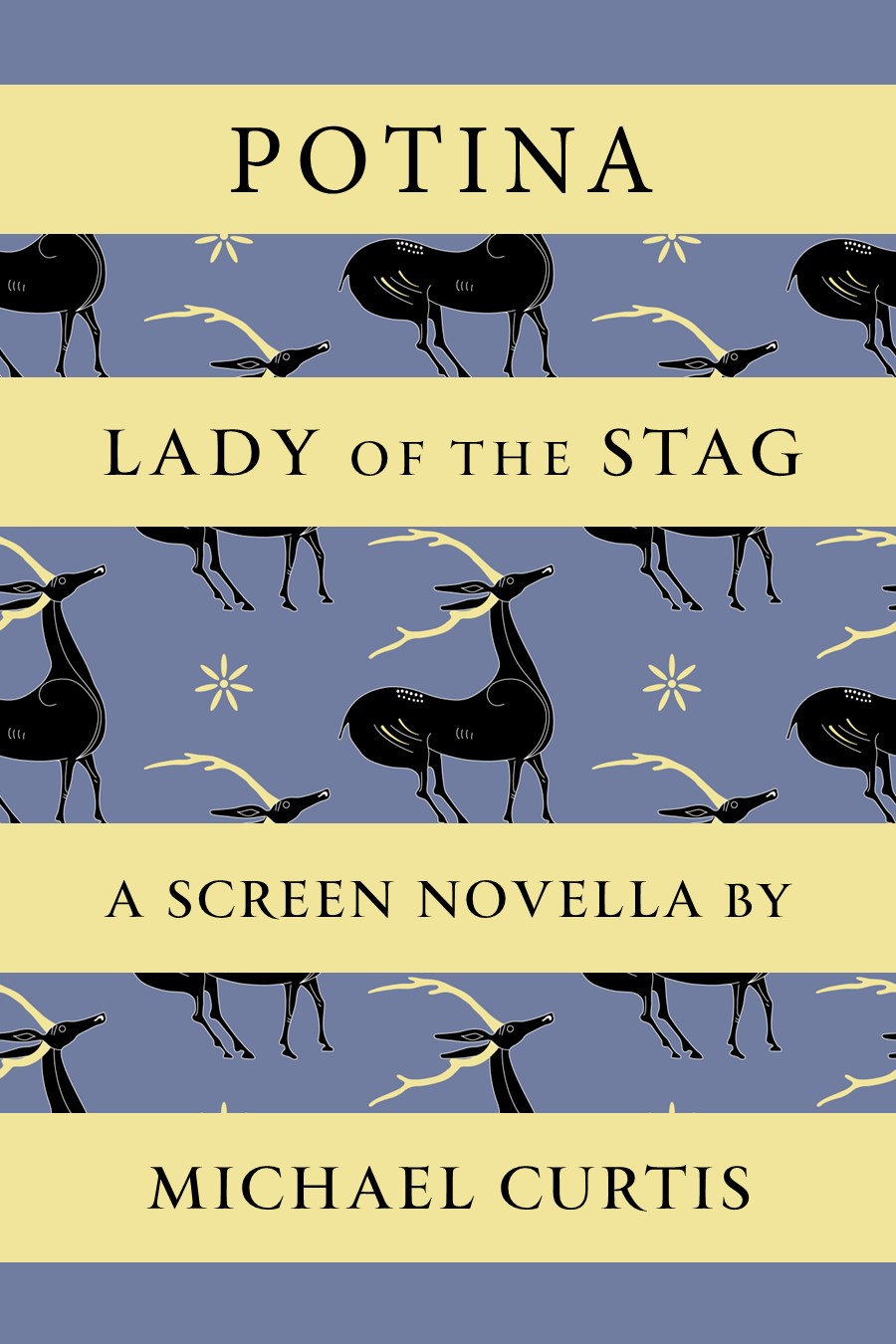 Potina: Lady of the Stag

Setting: A pleasure-palace in the rich seaport of Akrotiri

AIYANA gathers saffron for a festival of the goddess at which Sama’s mother, queen KITANE presides. Other young, royal ladies weave enchanted tales of the ruin of girls who commit errors during sacred rites; the princess PASIPHAE, paramour of prince SAMA (and the king) weaves deceptive tales that set-in-motion events that threaten Aiyana, the rite, and the palace.

Our story concerns a girl’s growth to heroism in an age of demigods. The girl, Aiyana, proves Franklin’s axiom that, “nothing is more likely to make a man’s fortune than is virtue”, and the 1600 B.C. American Aiyana, alike Franklin, moves through the royal courts proving herself superior to mere pedigree. Our story is seen through the eyes of Aiyana, witness to the creation of civilization by masculine force; then, as Aiyana grows in feminine virtue, she flows along the stream of history in humble virtues which save, which extend the world, the ways, and the will of men.